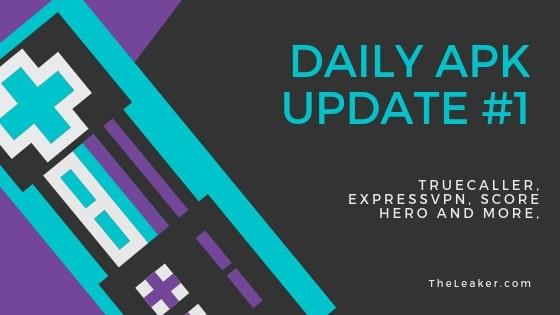 We had received lots of your love and support on our OnePlus Daily News, and many of you asked us to make a daily series on APK Updates, so on public demand, we are here to provide you details of all significant Android App updates on a regular basis. There are thousands of apps on the play store getting updated daily, While not all apps are as good and many people don’t use them, we have filtered out and brought the major Android App Update. So today we will be talking about the updates in Truecaller, Smart Launcher, Score Hero, Express VPN, WA Tweaker for Whatsapp and More! So Welcome to the Daily APK Update #1

This is one of the best premium VPN services available in the world and is continuously updated, the ExpressVPN has started to receive a new update with version number 7.4.0 which adds a ‘network protection’ feature which is used to block internet traffic while the app is not able to connect to the server, along with this it enables access to devices on local networks such as printers and more while the device is connected to the VPN. The update also fixes many bugs and brings improvements in the app as well.

The latest version of this WA Tweaker for Whatsapp brings many new features such as support for the Xposed framework on Android Pie and more along with fixing bugs such as it fixes a crash on the app on Android 4.1.1 and many more bugs, it feels good developers continually working on updating the apps.

Score Hero is a fantastic soccer game which keeps on unlocking more new levels as keep passing previous levels, with the latest update the company adds hundreds of more new levels for the users to play along with Season 32 which provides some amazing tournaments and more!

The latest update of this game brings new features and modes such as an option to change names in the game, adds a new legendary Machine Weapon – Eidolon, improves matchmaking in PvP modes along with optimizing the game for low-end devices.