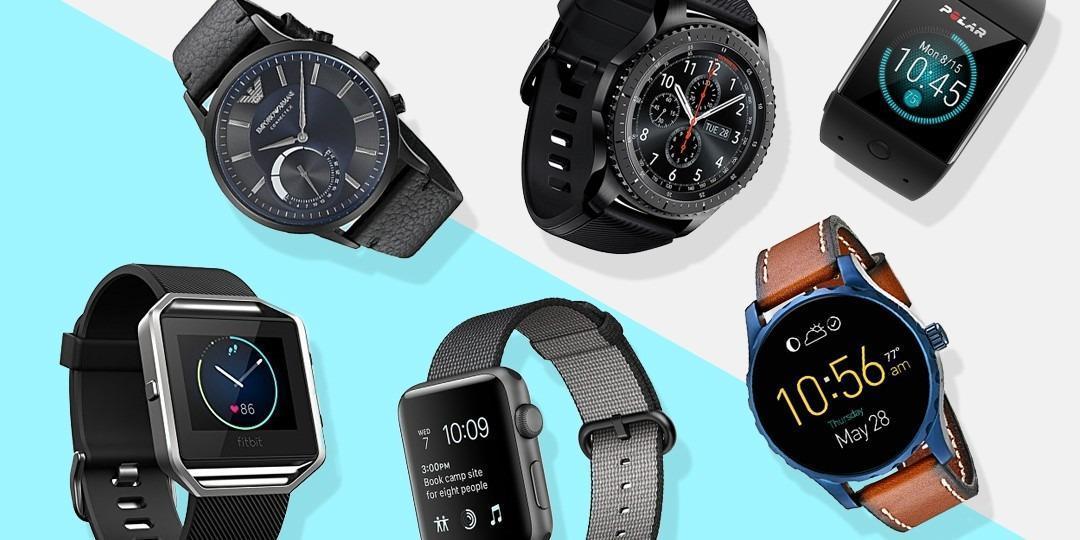 Smartwatches aren’t a new thing for anyone. You might be aware of many smartwatches in the market already. This makes a tough choice for you to choose the best smartwatch for you. Smartwatches serve acts as a companion to your smartphones. There are already some companies leading out there with their smart OS in their smartwatches.

We’re here to break down this for you. Before you choose a smartwatch and regret later, it is better to think wisely and make the most out of your money. That is why we’re here to help you with the Best Smartwatches You Can Buy right now. 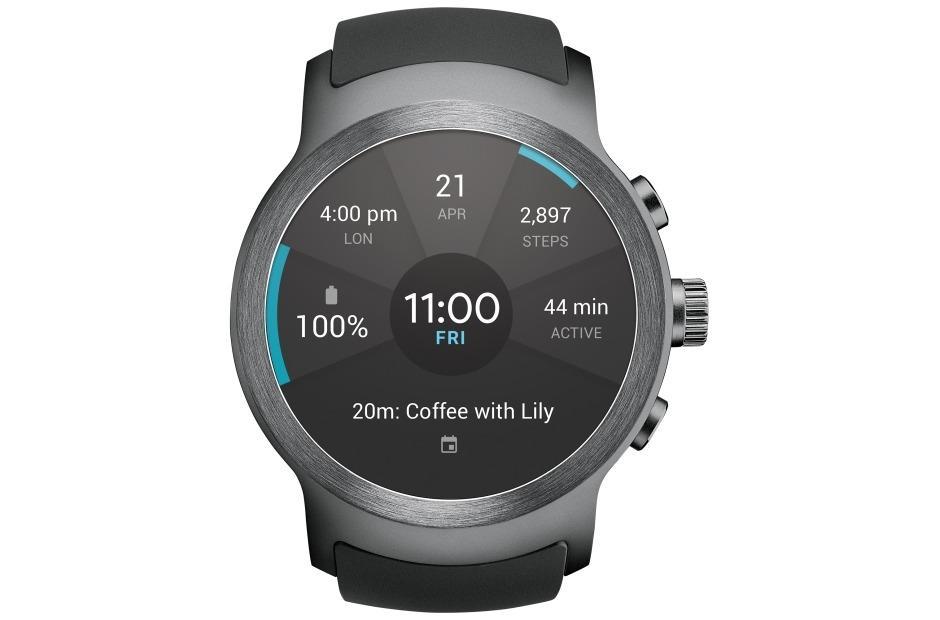 The LG Watch Sport is like the king of the smartwatches when it comes to the Android side. As you already know, the Wear OS is compatible with the iOS and the Android platform without any hassles. The LG Watch Sport comes with everything that you need from a smartwatch. If it includes fitness, smart features, beautiful display, amazing design, etc. All of them are embedded within this LG Watch Sport. The big AMOLED display, the heart rate, GPS sensor, LTE support, NFC, IP68 water resistance, everything is right here. That is why it comes to the first in this list of best smartwatches. 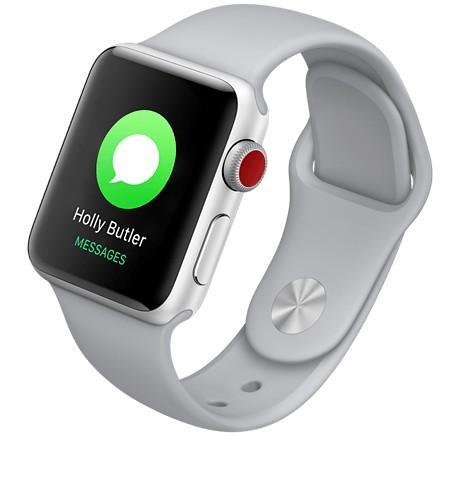 The best watch you can get if you’re on iOS. You might know about Apple Watch already. Seriously it’s just the perfect watch for every iPhone user. You cant go wrong wearing an Apple Watch. You got everything covered here. It’s the most advanced smartwatch available right now in the market. It might be a bit disappointing because it won’t work with Android smartphones. Also, we can’t complain about it as it comes under the Apple’s Ecosystem which works fine.

We expected an LTE variant in India, but it wasn’t launched somehow. The Non-LTE version is still good and would work same as the LTE version, but you just need to keep your phone connected to it all the time which isn’t a disadvantage altogether. 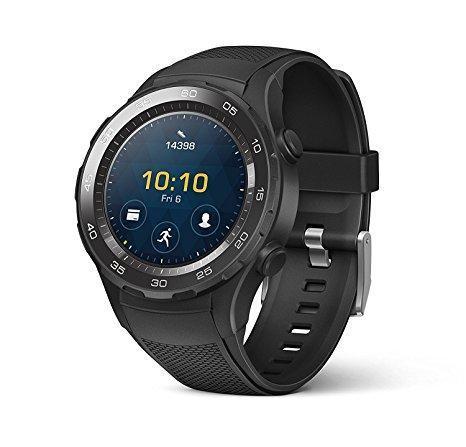 Huawei does make some great smartphones with their premium grade quality. Huawei Watch 2 is a great improvement over its predecessor. It’s the best smartwatch you can get with the compatibility of Android as well as iOS. The device got a well-done premium finish, and by premium, we mean “Premium.” Apart from that, we’re supposed to get Android Wear OS out of the box which has got re-branded as Wear OS by Google lately. The premium metal doesn’t cope up with its competitors, but it’s a great addition.

The downside is somewhat the display size, but the gain has the latest Android OS blessings from Google. In case you like round watches you can look over here. 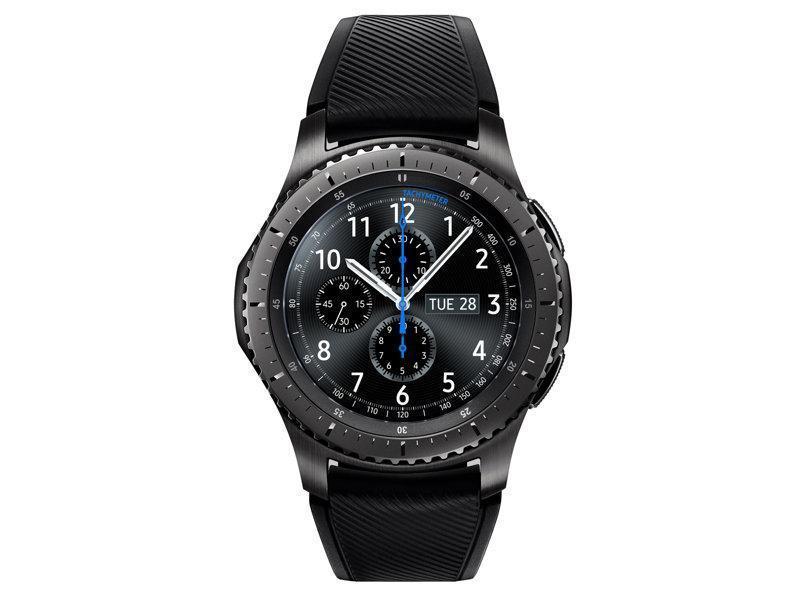 Samsung is already a great competitor to Apple without any doubt. This smartwatch is great when it comes to smart features. But the downside goes with their own Tizen OS, completely new. Using it wouldn’t be much familiar to you. Apart from that, insufficient apps would be like you made a bad deal.

Let’s not talk about OS; if we go deep into the features, the Super AMOLED display is just gorgeous to look at only if the colors weren’t supersaturated. The IP68 protection makes it well resistant to dust and water. Recently they made their Gear watches compatible with iOS too. So even if you have got an iOS device, you’re good to go without any hassles. In case you don’t have any problems with the Tizen OS then you’re good to go well apart with all the features, that’s why this is the best Samsung smartwatch you can buy. 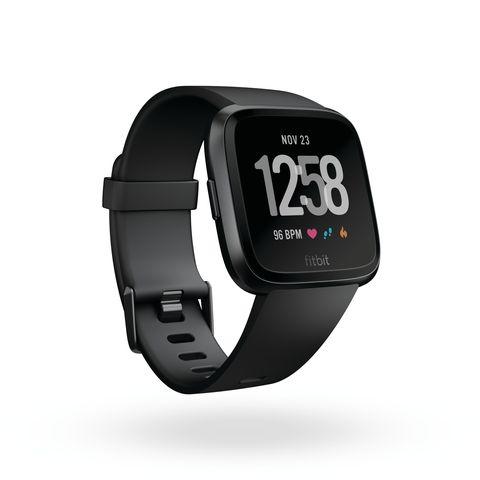 Fitbit is already a leading master when it comes smartwatches and fitness brands after Apple. They’ve been improving over years of experience and are trying to achieve the top spot in the market. Fitbit is well-known for its fitness bands. But, Fitbit took a step ahead and made a smartwatch, one of its kind. Just like Samsung Gear S3, the Fitbit Versa runs on their OS, the Proprietary OS. It can do all the stuff a smartwatch can do and your fitness things too.

The design looks same as Apple Watch. For your information, it is much lighter, faster, and sleek compared to Apple Watch. Lack of LED display is just unacceptable somehow. In the end, if you’re in search of a concentric best fitness smartwatch, then the Fitbit Versa is for you. 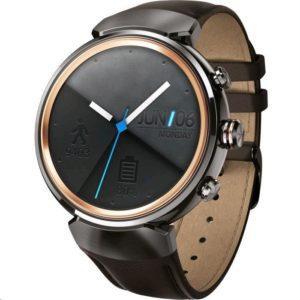 If you’re looking for a finest and the well working Wear OS by Google smartwatch. So you already knew about Asus, but you might not have known about its smartwatches being out on the market. The Zenwatch 3 is not better at keeping sensors in their place. But you need not worry; it has covered it up with their well-done design. You can’t take your eyes off it in any way. Looking for a premium build Android Wear OS watch but can’t afford Huawei Watch? Look nowhere else, get this Asus Zenwatch 3. It’s also one of the best classic looking smartwatches. 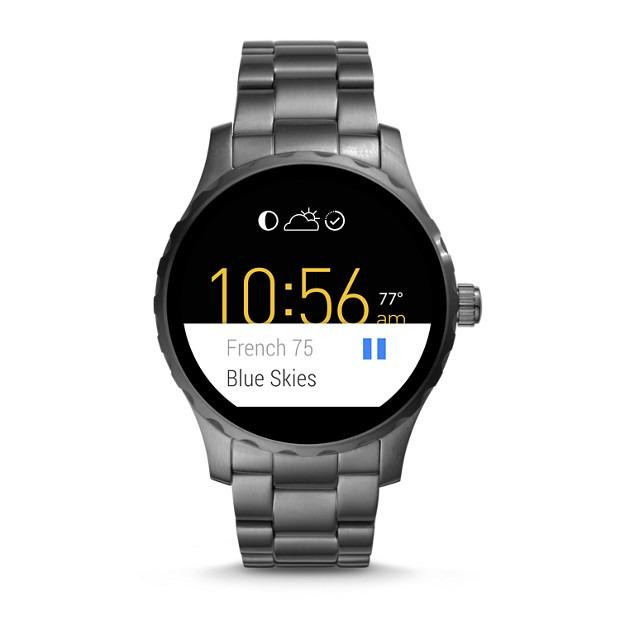 Fossil Q Marshal is a smartwatch launched back in 2016 at IFA and still retains its capabilities. Priced at Rs. 18,999 Fossil still steals the market which is considered about the budget. The bands are made out of leather, and the rugged feel looks dope. The round circular just looks fantastic and does make your eyes bling. The Snapdragon 2100 processor just gives the perfect boost. This makes it a perfect boost for Wear OS platform as well. When it comes to summing up everything, all we can expect is a great performance and a great design. If you’re into both these things, then don’t look anywhere. Just buy this amazing smartwatch right away. 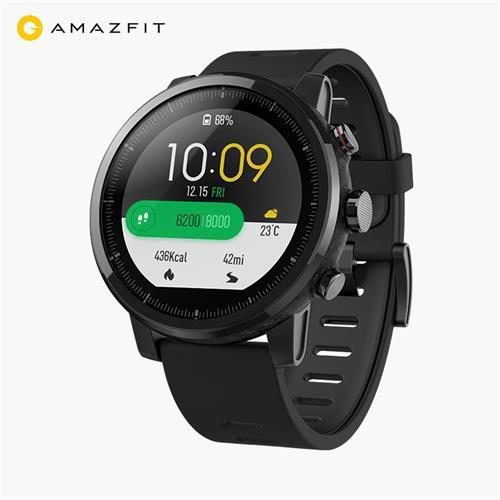 Huami is a sub-brand of the Xiaomi itself. And to be honest, we never expected much of a good device from Huami. To be honest, the name looks weird. But coming to the specs, we can see that it’s an amazing smartwatch to experience it yourself. The watch does mostly related to fitness but still manages to work out the features that all the other smartwatches have. The design is round but looks very simple, and that red and the black color combination looks stunning. If you’re looking for a smart fitness smartwatch, then you’re in for Huami Amazfit Stratos. 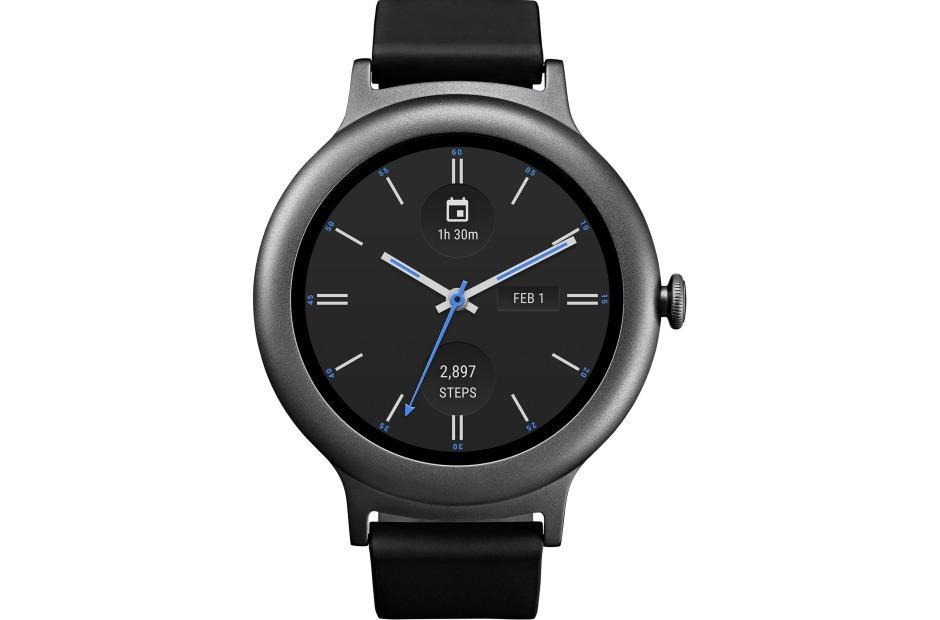 The LG Watch Style is the second option you can go with, alongside the LG Watch Sport. Or in case if you are moreover towards the modern design language, this is for you. If you’re looking into a cheap but great watch, then you can’t deny the LG Watch Style anyhow. Unlike the Sports edition, this doesn’t come with NFC, LTE support, GPS and not even the heart sensor. So, it’s like a polished, sleek version of LG Watch Sport. It is one of the watches you can consider if you are not into fitness department but still want those Wear OS features. 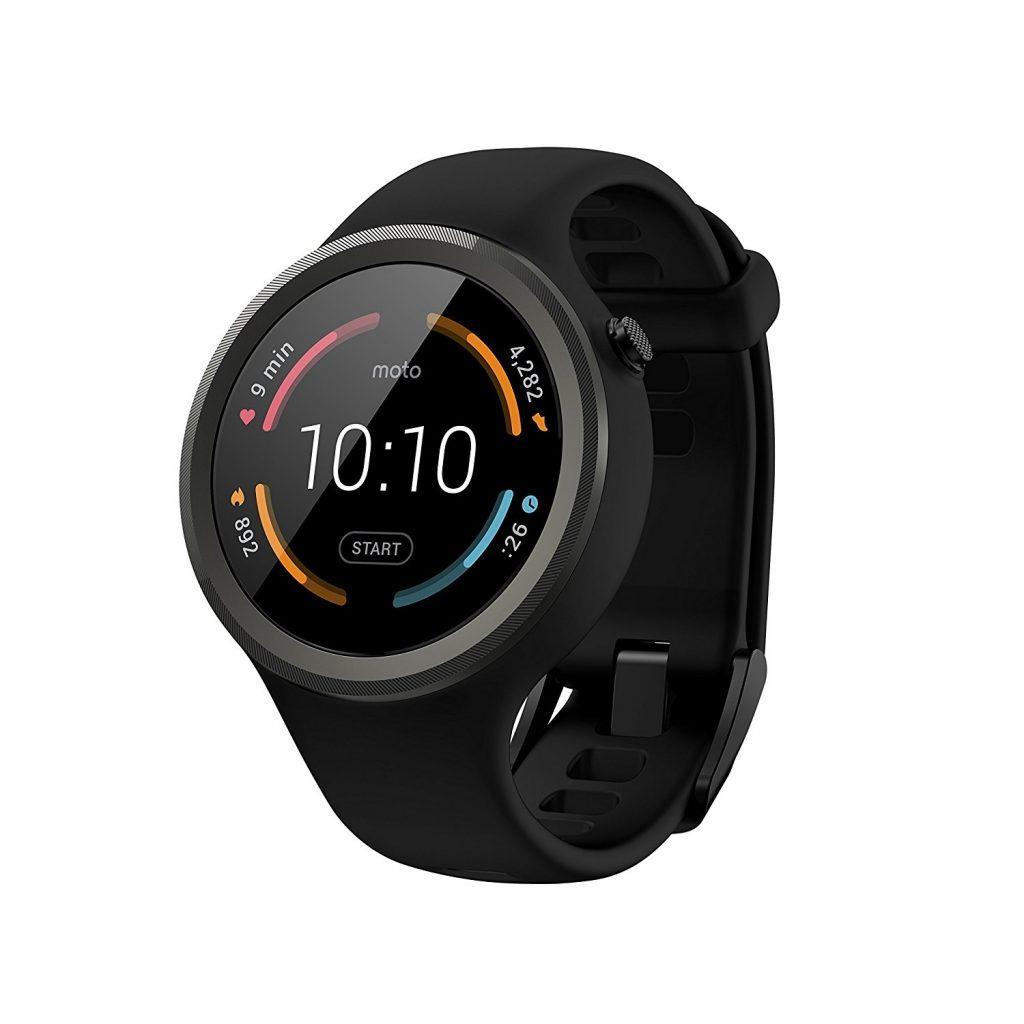 Last but not the least, the Moto 360 Sport is a bit old but still is a Gem in the sea of smartwatches. Moto 360 had that amazing design signature since the beginning, and they’re still able to put their potential in those smartwatches. The 360 Sport still packs some amazing stuff which you can expect from any sports edition watch like the LG Watch Sport. The Moto 360 Sport got an amazing display, and the design is amazing. If you’re looking for an Android smartwatch with a trustable background apart from those above, this is the one to go.

At last, we get to the end of this Best Smartwatch list. We hope you get a good idea about selecting a smartwatch before you were to buy one for yourself. If you do have any suggestions, then leave them in the comments below. Kepp tuned to TheLeaker for more content like this.