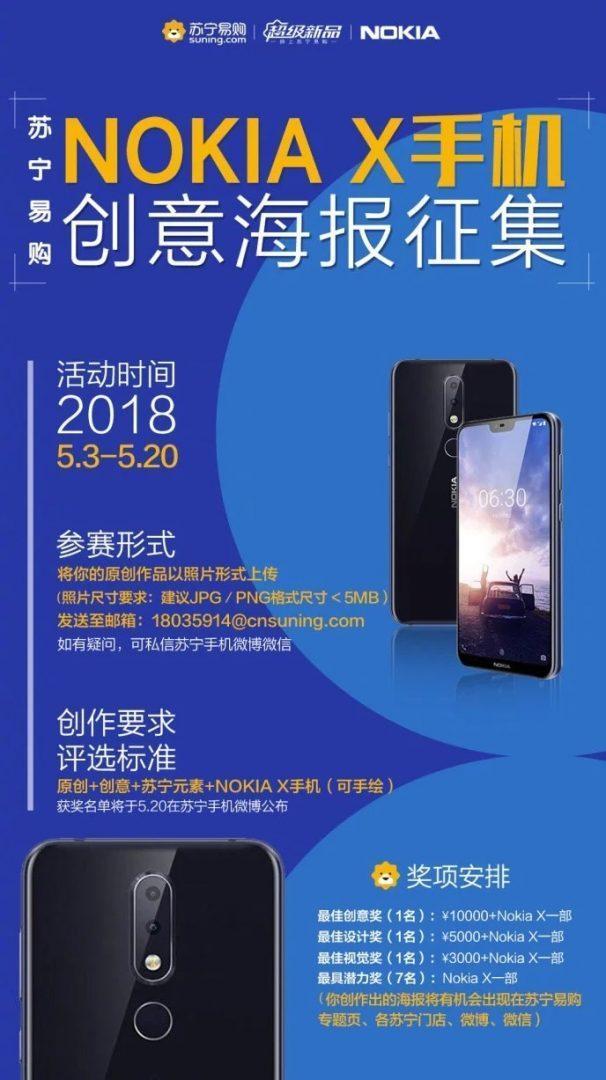 HMD is getting ready to unveil its next smartphone under the Nokia branding, and this time it is the Nokia X, which is just a few days away from its launch. The handset has been again leaked in a new promo poster giving us an overall final look at the device and confirming everything from the previous leaks. The poster appears to be a Suning exclusive one, where the Nokia X will go on sale in China. As you can see the handset is inspired from the iPhone X, but with a very prominent chin, similar to the LG G7 ThinQ, the Huawei P20 Pro and also looks similar to the OnePlus 6.

While on the rear, you get similar design references from the Nokia 7 Plus, with vertical stacked Dual-Camera, of course, comes with Carl Zeiss lenses. Under the camera stack, sits a circularly shaped fingerprint scanner. So that bottom chin on the Nokia is useless unless you’re a fan of the Nokia branding on the front.

Moreover, if there’s a front chin, then the notch at the top of the display is only to sell it under an iPhone X like look alike as there’s no faceID or any other significant functionality within it. However, a software toggle might use it to hide the notch, then making it look symmetrical overall.

Another thing here to note is that this is not a flagship device by any means, but a premium mid-range device.  The Nokia X will be powered by a Snapdragon 636 with 6GB RAM for the top of the line model. While the base variant could get a MediaTek Helio P60 with 4GB RAM.