The Android Firmware version comes as G610FXXU1BQH8 and weights at about 1139.63MB, which suggests Samsung has not skimped on any feature of the Android Nougat Update. Moreover, this new update brings plenty of new functionality to the Galaxy On Nxt; which includes a new fresh user interface of TouchWiz. A completely revamped notification shade with extra functions as well as a new menu bar for accessing quick settings. 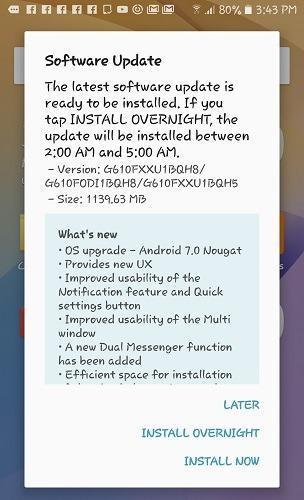 For multi-tasking, you got Google’s signature split-screen support and improved dozed mode. Apart from this some bug fixes and performance enhancements are also included in this new roll-out.

As per the norm, the updates will move slowly covering various regions one by one across the Indian continent. So, if you have not received the notification yet keep checking manually by taping onto Settings > About Phone > System Updates. Also, make sure you are running on 60% plus juice, to finish the installation process smoothly.

The Galaxy On Nxt was launched in April of 2017 and had marshmallow out of the box and runs on Samsung’s Exynos processor, so it’s a good news for the On Nxt owners that even with such a combo they are getting the Android Nougat update, which is the last update this device will ever receive.